The focus of the 5G PPP H2020 remarkable research so far has been largely on the required advances in network architectures, technologies and infrastructures. Less attention has been put on the applications and services that will make use of and exploit advanced 5G network capabilities. 5G-MEDIA aims at innovating media-related applications by investigating how these applications and the underlying 5G network should be coupled and interwork to the benefit of both. In this respect, 5G-MEDIA addresses the objectives of 1) capitalizing and properly extending the valuable outcomes of the running 5G PPP projects to offer an agile programming, verification and orchestration platform for services, and 2) developing network functions and applications to be demonstrated in large-scale deployments.

The final outcomes of the project have been an implementation of the integrated 5G-MEDIA platform that have been extensively tested against different use cases in the media vertical. In Figure 1 the final refined architecture of the 5G-MEDIA platform is shown. Following the initial design, the 5G-MEDIA technical solution consists of two main components the 5G-MEDIA Service Development Kit (SDK) and the 5G-MEDIA Service Virtualization Platform (SVP) that have been fine-tuned during the last project year to deliver a complete integrated technical solution for media service management across the service lifecycle.

The 5G-MEDIA SDK can be considered as a sandbox where the service developers can develop, emulate and test their NFV-based services, integrating both development and operational aspects together. In particular, the SDK consists of the validator tool that analyses the descriptor and validates its compatibility against TOSCA and/or OSM schemas. The validator which was previously offered as a CLI is presented in 5G-MEDIA as a user-friendly Web UI where developers can validate their descriptors against two schemas. Using the 5G MEDIA Service Catalogue NBI, the validated descriptors can also be onboarded to the private catalogue. On top of these basic operations, 5G-MEDIA SDK Emulator relies on background components (i.e., vim-emu and FaaS-vim) to allow execution of real network functions packaged as Docker containers in emulated network topologies running locally on the developer’s machine. One step further, the benchmarking service supports load-testing under several resource constraints on VNFs that are deployed on the emulation environment. Overall, the goal of the emulation is to validate the functional properties of VNFs and NSs (e.g., finding bugs, detecting congestions or investigating issues in their applications). Provided that the performance metrics of the developed service is satisfying in the development environment, the developer can onboard their services to public catalogue of the platform which automatically onboards the services in the production OSM where the services can be instantiated. The 5G-MEDIA SDK also offers support for the life-cycle management of the services deployed in the SVP with tools such as i) the CNO Training tool facilitating developer in configuring a training model based on reinforcement learning and testing its training performance and ii) the SVP Runtime Advisor, which gives feedback to the developer on how their services are working in the operational environment. This is necessary to compensate for differences between the offline emulation environment and the actual operational environment conditions and workloads. The SDK therefore constitutes a toolkit supporting continuous corrective service development throughout the service lifecycle.

The Service Virtualization Platform consists of four main components. It has two central components: the 5G-MEDIA Service MAPE and the 5G-MEDIA service orchestrator, which are responsible for the intelligent orchestration of media services over the heterogeneous NFVIs. In addition, it has two auxiliary services: the 5G Apps and Services Catalogue (Public Catalogue) and the 5G-MEDIA AAA services, which support horizontal services of the platform such as VNF onboarding to public catalogue, user authentication and authorization services. In this line, the 5G Apps and Services Catalogue is a structured repository of heterogeneous media applications, functions and service descriptors based on a generic and unified standard format, such as VNF Descriptor (VNFD) and NS Descriptor (NSD) data models. The catalogue offers NFV MANO and domain-specific translation functions from ETSI NFV standard to specific or proprietary descriptors and packages format. In particular, in the context of 5G-MEDIA the 5G Apps and Services Catalogue provides an automated translation and mapping from the ETSI NFV standard TOSCA based VNF Descriptor and NS Descriptors (used to model and describe the 5G-MEDIA media services) to the ETSI OSM specific data models, being OSM the reference NFV MANO tool in the project. One step further, the main role of the AAA portal s the provisioning of a centralised and simplified view to administrators of resource utilisation and the associated costs for services running on the platform. It has been designed to allow future extensibility through a plug-in architecture.

In the core SVP services, the 5G-MEDIA service MAPE relies on monitoring mechanisms to retrieve static data from NFVIs, such as the resource model (i.e., available computing and network resources) and dynamic data relevant to the execution of the services (such as application data). Besides the collection of resource consumption data, the 5G-MEDIA project has defined application-specific metrics, relevant to media use cases for quantifying the Quality of Experience (QoE). In order to measure the performance of the service in terms of perceived quality, the platform deploys a QoE probe as a VNF close to the end user, which provides a Mean Opinion Score (MOS) through a statistical model fed by Non-Referenced (NR) video metrics. On top of the monitoring services, the 5G-MEDIA Service MAPE provides a two-level optimization approach that can be generalized to different hierarchical models, depending on the distribution of resources and the control layer scheme. The two-level optimization approach of 5G-MEDIA platform ensures that both local and global optimal solutions are considered. Finally, the 5G-MEDIA Service Orchestration encompasses traditional VNF orchestration as well as serverless FaaS VNF orchestration. To achieve this goal, the concept of serverless VIM was extended to serverless Virtual Network Function Manager (VNFM), and serverless Service Orchestration – resulting in a full serverless management and orchestration stack in the Service Virtualization Platform. This stack is interoperable with OSM (the MANO framework used in the 5G-MEDIA project) and complements its functionality allowing to unleash the full potential of a serverless computing paradigm for media applications. 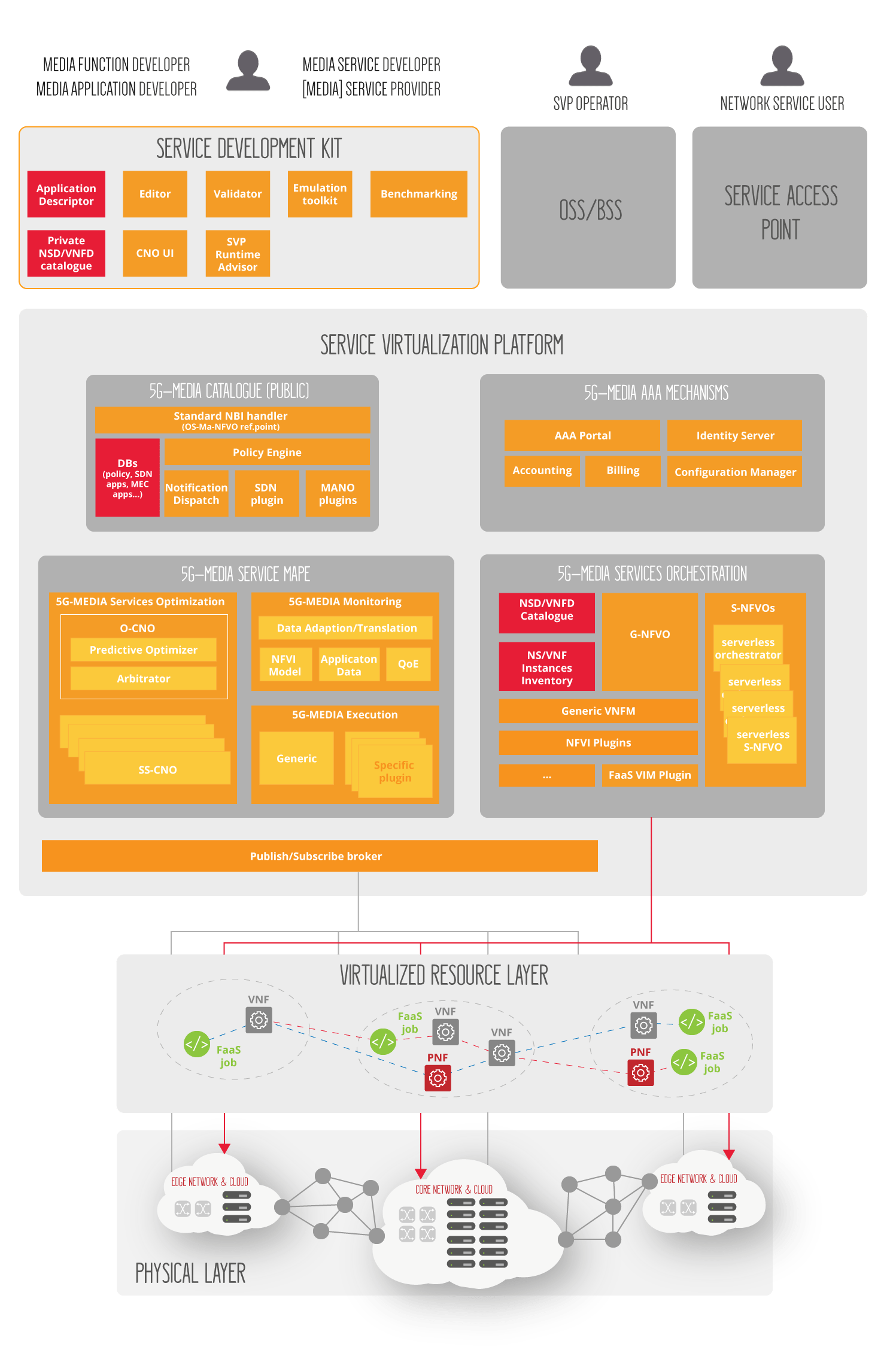 The innovative components of the 5G-MEDIA platform have been demonstrated in three use cases and an additional cross-cutting scenario on different infrastructure provided by the 5G-MEDIA consortium partners.

The most impactful events where the 5G-MEDIA progress and use cases have been presented and demonstrated are: the workshop “Media delivery innovations using flexible network models in 5G” at IEEE Broadband Multimedia Systems and Broadcasting (BMSB) 2018, four different workshops organized within the EuCNC 2018 – European Conference on Networks and Communications 2018, the Mobile World Congress 2019 where the 5G-MEDIA project has been hosted in the 5G IA booth and EuCNC 2019 and Global5G conferences, co-located in Valencia happened on June 2019.